Hello  all and what you  reading. 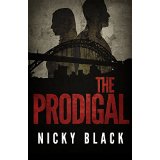 I was asked by the author, Nicky Black, if I would like a copy of ‘The Prodigal’ in return for an honest review. I was delighted to accept. It is available from Amazon, currently for 99p, as an e-book and also in paperback.

Detective Sergeant Lee Jamieson is returning to Newcastle, after 16 years away, to meet his daughter for the first time and take up a new police post. He isn’t prepared for just how deprived, and depraved, the area he grew up in has become. When he finds himself involved with Nicola, his world becomes ever more complicated and dangerous.

I’m not a natural reader of crime fiction but I can honestly say that I found ‘The Prodigal’ absolutely brilliant.

The fact that this originally began life as a television script serves only to amplify the quality of the writing. Much of the original dialogue has apparently been…

Reading Shutter Man by Richard Montanari. For NetGalley. Struggling to be honest. Liked all his previous books.

I received this book from the author herself as a goodreads give away. Not my usual genre. I have read books about vampires before but not what can be termed a paranormal romance. The fact that i enjoyed this book is down to two main reasons. Firstly the excellence of Ms.Skye’s writing and the fast moving plot. Once you get used to vampires texting and using mobile phones it is great. And i mean why shouldn’t they? they live a very long time if not actually being immortal. That is another thing that appealed. Though set in the modern world she kept the medieval element eg. sword fights etc. I am glad I won this book and look forward to the sequel and if I can’t win it I will buy it. Thanks once again for an excellent book.